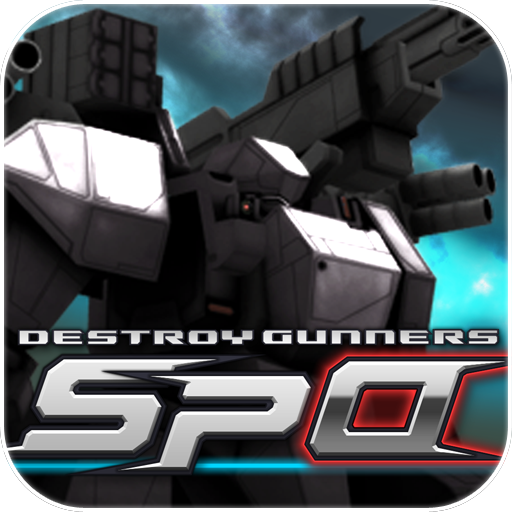 New main feature is fierce battles between you and enemy's equipment in the base.
Also,new gimmicks have been added such as warp point,mission with wingmen.

When billing, provides a point of "ADS POINT SHOP"!

『Destroy Gunners SP』brought out the limitation of the performance of the newest smartphones.
This title is new generation 3D action shooting game that exceeded any past game machines.
A player can control realistic armed robot intuitively by touch panel control
and any player can experience impressive battle scenes easily.

To accomplish missions, the player destroy numerous enemies with get arms.
the player can customizes player's robot(armed destroyer) to reinforce the robot repeatedly
and challenge more higher,severe missions and mighty boss!
Significant buildup of maps and arms from free version:『Destroy Gunners F』.
Also, the player can choose player's robot from many types.
Customizable robot system allows that the player can set and change parts to create original armed robot.

“Let's destroy all enemies more than anybody in the battlefield of blast and gun smoke.”

*SP-FREE version is 3 stage only.

If hang up and no repose happen on SAMSUNG GALAXY S2,
please select RESTRICT SE (MEASURE TO CRUSH) and "ON" in GAME OPTION menu
or turn off SOUND EFFECT in the option menu to avoid this problem.

-----------
Shade Inc. guarantees this app is NOT malware.
If false-positive virus detection happens, please ignore that alert.
(Some antivirus software detect the link function to our other apps as malware But it is false-positive virus detection.)
-----------
Renewal reward advertising.
You can earn points for free by installing the application that is displayed in the ad list.
It is now possible to get the item or mission using the points earned for free.
Added permission is used by reward ads. Application side never uses added permission at all.
-----------